I got a new neighbor just before the New Year when young Parker arrived into the world. What perfect timing since I’d finished my quick and sparkly scarf and was on the look out for a new project.

I’m a sucker for babies and a cleverly designed knit. This one fit the bill. It’s knit in one piece. Nary a seam on the whole thing. The Yarn Harlot was my inspiration yet again. She knit several kimono-style baby sweaters last year while awaiting the arrival of a friend’s baby. I loved the style — no over-the-head wrestling needed since it buttons up the front side. Plus it has a few clever-but-not-difficult design features and stitches which always makes a project more intriguing.

It’s called the Puerperium Sweater (by Kelly Brooker), named for the period immediately after a baby’s birth. I was running a bit late since wee Parker had been around for a while, but that didn’t faze me.

I even managed to find some cute buttons to complete the look.

I used Cascade 220 Superwash in Aran and Navy. I hope he hasn’t outgrown it already…. 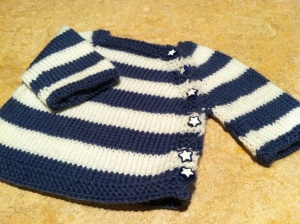 One thought on “Baby Stripes”

This site uses Akismet to reduce spam. Learn how your comment data is processed.